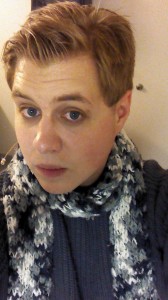 Christopher is a theatre artist that has been working and creating art in the Fargo-Moorhead area for the past 5 years. Christopher graduated with a degree in Theatre Art with an emphasis in Directing, Performing, and Design, as well as a degree in Communication Studies. His love of theatre began in high school when his friend dragged him into an audition for Thoroughly Modern Millie and was cast as “Mama” and an ensemble member. Ever since then Christopher has been in perpetual production for a show somewhere.
Christopher is in his second year as, the newly titled, Artistic Director at Oak Grove Lutheran High School. During his first year he directed The whole Shebang, You’re a Good Man, Charlie Brown, and Godspell. Before he began his work for Oak Grove Christopher has previously directed children’s theatre at the Fargo-Moorhead Community Theatre (FMCT), some of his production credits include: Aladdin Kids, Aristocats Kids, and School House Rock Live. Jr. He has also taught a few youth acting classes with FMCT.
Christopher has performed in various productions around the FM area with Concordia, FMCT, and Tin Roof Theatre Company. Some of his favorite shows to perform in where Schoolhouse, Little Women, Brighton Beach Memoirs, The Foreigner, Young Frankenstein, Camino Real, and The New Years Eve Musical Review. Besides working in the FM community Christopher has been performed in/fight choreographed shows in the Detroit Lakes are such as: Taming of the Shrew, The Merry Wives of Windsor, Romeo and Juliet, and The Mystery of Irma Vep.
Along with that Christopher has also been known to design and work on make-up/special effects make-up for shows. Some of the work he is most proud of was in the productions Slasher, Return to the Forbidden Planet, and Eurydice.
Christopher hopes to never stop working in the theatre and wants to thank his friends for their patients and parents for constant support and love.